How to Easily Make a Meme with Standard Impact Font 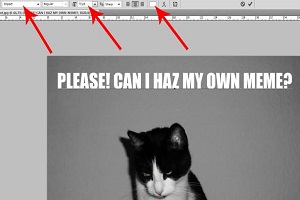 If you are a meme lover, you may have noticed a particular font type used as meme texts, thereby giving memes a generally similar appearance. This font typeface is called Impact font, and it has been in existence since 1965. Impact font memes have become a favorite of most users over time, a viral idea accepted as a legible de facto meme text.

So, if you are looking to learn how to use Impact fonts to make memes, we have you covered in this article. It can be quickly done with our recommended top Impact font meme generators.

The most conventional font type is Impact font out of all these font types. This classic font has been around for a long time and is frequently used on social media platforms like Instagram, Facebook, etc.

Part 2. Why Should You Use Impact Font as a Standard Font?

Impact Typeface has been around since 1965, as mentioned above. It is a Sans-Serif Typeface designed and released by Geoffrey Lee as the most popular classic meme font. At first, Impact font was used to type headlines as it had a grotesque industrial style. Geoffrey Lee sold the typeface to the Stephenson Blake foundry, later to Monotype. In the '90s, Microsoft licensed 11 fonts as freeware for its Windows 98 OS (Operating System); Impact was one of the fonts, which then became quite popular in the market. With time, Impact became an obvious choice for websites as it was free to use and very legible on virtually every image it is placed upon.

Why should Impact font as your meme font when creating a meme with text? Here are some reasons why:

To know more about Impact meme font, visit this site.

Part 3. How to Readily Create a Meme with Impact Font

This section recommends 2 online Impact font meme generators you can use to create memes online using Standard Impact fonts. We also show you how to use these Impact font makers:

The first recommendation is the Make a Meme online tool. This online meme generator allows you to upload an image to the home page, use any of its 50 plus text font styles, and create a meme that you will share among your viewers or in group chats. The tool is free for use, but if you must remove the watermark on the final output meme, you must register for the site for free. Also, you need to register to gain access to the wide range of font types provided by this font creator online tool. 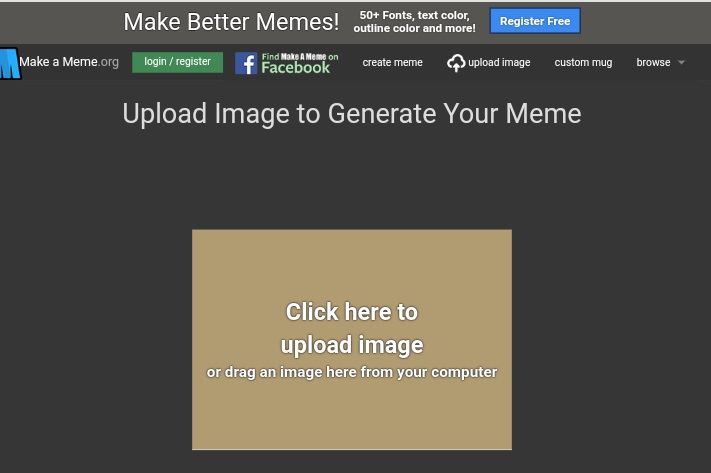 Get a good web browser on your computer system or mobile phone, visit Make a Meme, and then follow these steps to use the tool to create memes with Impact text:

Step 1: Upload an image to create a meme.

Drag an image and drop it on the home page from your device storage or click the center page to upload any image you want to use as a meme from the device storage to the online tool.

Add Impact font to the image you are using as a meme. The tool also allows you to choose the color of the text and its outline color. Next, please type the text on the top and bottom of the image, then set the privacy settings of the meme, as well as its title. Finally, click “Make the Meme”.

Step 3: Preview and save.

Click the preview button to get a final look at the meme before saving it to your device for further sharing on all your social media platforms.

Maximum Impact Font is a toolbox on the Font Meme online site to create memes with Impact text. This tool has an extensive collection of font characters and designs from which you can choose to edit your Impact font meme for free. However, if you must use them for commercial purposes, you must pay the designer for the license. With this tool, you can create text graphics with colors and appealing effects. Note that this tool is specifically designed for generating text memes; hence it works as an Arial font generator, Sans font generator, and not just an Impact text meme maker.

To use this font creator online, follow these simple steps:

Visit the Font Meme website and in the preview box, type the text you wish to use as a meme.

Edit the Impact text by choosing the font color, the effect you want to apply to the text, and the font color. Next, click “Generate”.

Finally, download the Impact meme font to your device storage. Then, you can share the meme to your social media platforms to entertain your viewers or give them something they can relate to.

Part 4. Are There Other Popular Fonts for Meme?

If you are a regular meme creator or user, you will realize that, indeed, there are several other popular fonts you can use as meme texts. After using a popular meme generator like Media.io Online Meme Generator, it has become clear that you can explore other fantastic meme fonts, such as Noto Sans, which is the same as Google Webpages' font. This tool is easy to use on any good browser. There are different image templates you can pick from. There are also font styles, colors, positions, and sizes to use when applying texts to your image templates.

Although UniConverter Meme Generator does not support the Impact font, I have found that it supports other font types that give your meme a generally appealing outlook. In addition, these fonts are clear to recognize and read, so you do not have to worry about their legibility. Such fonts supported by this tool include Noto Sans, Ubuntu Meno, and Noto Serif. These meme fonts are worth trying, so you are not limited in variety.

Generally, Impact text is not the only font you can use on memes. You can try other font typefaces, such as Arial, Arial Black, Andale, Courie, ComicSans, Comic 32, Georgia, TimesNew, Trebuchet, Verdana Wedding 32, and Webdings, etc. These fonts also have variants to choose from if you do not like the main versions.

Personally, my take is that the popularity of a meme font shouldn't be the only determinant of whether or not you use it to create your memes, but the value you get when you use the font matters. Do not be limited in font types; explore different styles to variety your memes.

Standard Impact font has always been a classic meme font style for a long time because of its legibility and boldness. That is why as a meme lover/creator, it would be to your advantage to learn how to make an Impact font meme. This blog has given you the necessary guidelines for easy use of Impact font meme makers to create memes with Impact. As a bonus, you have also been shown how to use practical tools like Media.io Meme Generator to create memes with different font styles to give your memes a variety of intriguing looks.